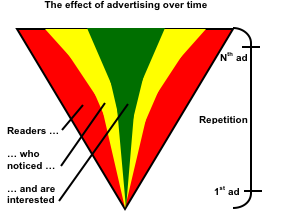 If money were easy to come by, every ad would run in every issue as a full page. But a buck is hard to make and compromises are a fact of life.

So what’s more important: running a big ad or running an ad often?

Advertising – any advertising, whether print, online or broadcast – works best through repetition. Look at it this way: You know that if you send a direct mail piece or a mass e-mail, only a small percentage of recipients will actually open it.

Advertising offers better percentages, but the concept is the same; 10,000 people may read a publication, but only some of them will notice any given ad.

Conventional wisdom in the media industry says it takes 7 impressions to attract a reader’s attention. I’ve never actually seen any research to support this. But I think I know where it comes from. I’ve been involved with research at various magazines over the years that indicated 10% to 20% of readers were able to positively identify whether a specific ad ran in the most recent issue. Larger ads generally increased reader recall.

From that you can conclude an ad needs to run 5-10 times before everyone in the publication’s circulation can be assumed to have noticed it.

(A statistician could find about a dozen things wrong with this statement. And the research will vary widely depending on the publication, its audience, the number of pages and advertisements it contains, and a host of other factors. So please take it in the general spirit intended).

But just because people see your ad doesn’t mean they are currently interested in what you’re selling.

For instance, regardless of how large your ad is, you’re not likely to sell carpet to someone who’s renting an apartment month-to-month. 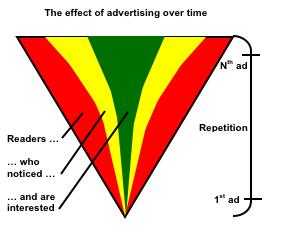 The more times an ad runs, the greater the number of people who have a chance to see it. Those who will be interested in your product or service are always a subset of that number.

That’s why I recommend frequency as the higher priority in advertising. Frequency is a factor in all three things while size is only a factor in No. 1. I’d confidently predict better results over time for someone who runs a smaller ad in every issue than a larger ad sporadically.

Further, spending too much on an ad can harm its chances of success. How?

If you sell houses for a living, a single commission can pay for a year’s worth of large ads. Selling a home is a big deal involving big money, and a big ad to discuss it seems reasonable.

But if you sell haircuts or ice cream cones your ad needs to attract a lot of customers just to cover its cost. The larger the ad, the better it has to perform just to pay for itself.

If you run a hair salon, how many strangers on the street would you have to approach and talk to before one of them says, “I was just thinking of getting my hair done and I’m not satisfied with my current stylist. I’ll head over there right now.” Would it be 100? 200?

Run through the math: If a publication has 10,000 readers, perhaps 1,000 of them (1 in 10) will take note of your ad the first time it runs. If 1 in 200 decides at this particular moment to abandon her old hair salon and try yours, that means it would be unrealistic to expect more than 5 people to walk through the door as a result of the ad. What is a reasonable amount to spend for those 5 people? And because this is an inexact science, what’s a reasonable amount to spend if the first time the ad runs, it’s only 1? Or none? (As in the bottom of the pyramid in the graphic above.)

So be realistic about how much business the ad is going to bring in – especially in the first few months – and don’t sign up for more than you can afford to spend out of existing cash flow. And expect the results to improve gradually over time, until a steady flow of people tells you they’ve noticed your ad.

There are moments when these rules of thumb may not apply. For instance, if you’re promoting an event or have some other short-term message, then it’s most important that your ad gets noticed right away by as many people as possible. That’s when you want to buy a large ad and negotiate (or pay for) the best positioning you can get.

Color too plays a role. Spending extra as needed for color will help get your ad noticed – though it has a lesser impact than size. Also, color probably has more impact on the way your message is perceived than on whether it’s noticed at all.

The small business owners who tend to be happiest with their advertising are those who buy a smallish ad, spend time developing its look and its message, and then commit to running it month after month, year after year.

Advertising works. It’s not so much an expense as an investment. So invest wisely and consistently. Do it in a way that you can afford to give it time to work. If you do, it will make your business better.

Bob Rosenbaum is founder and principal of The MarketFarm, a content-oriented strategic communications firm.

…with a fast flat-fee assessment of your communications programming